Rosabus has made the transfers of the XVI Congress of the Association of Academies of the Language.

In this congress (ASALE) organized by the Royal Spanish Academy, of which King of Spain holds the presidency of honor, twenty-three Spanish language academies from around the world participated and gathered for the good use of Spanish, today heritage common of 580 million people.

The ambitious program of this congress was divided into two parts: an internal academic and reserved for members of ASALE corporations, and a cultural one, in which all citizens could participate and participate. 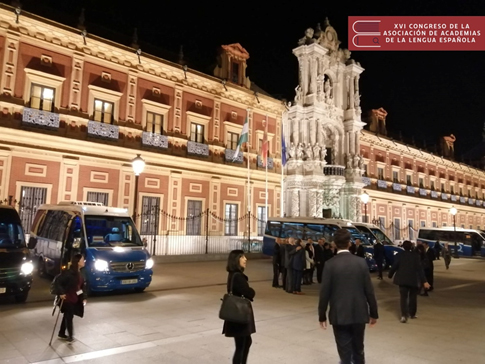 The wide and varied set of cultural activities offered by the congress was a novel initiative aimed at strengthening the relationship of academies with society as a whole and promoting the projection of its Pan-Hispanic action. Undoubtedly a great organization for the benefit of all Spanish speakers.

The closing session took place on Friday, November 8, under the presidency of  kings of Spain. As part of this session, the Royal Spanish Academy, backed by ASALE, presented its Spanish Language and Artificial Intelligence (LEIA) project, which aims at the defense, projection and good use of the Spanish language in the digital universe and, especially, in the field of artificial intelligence and current technologies.